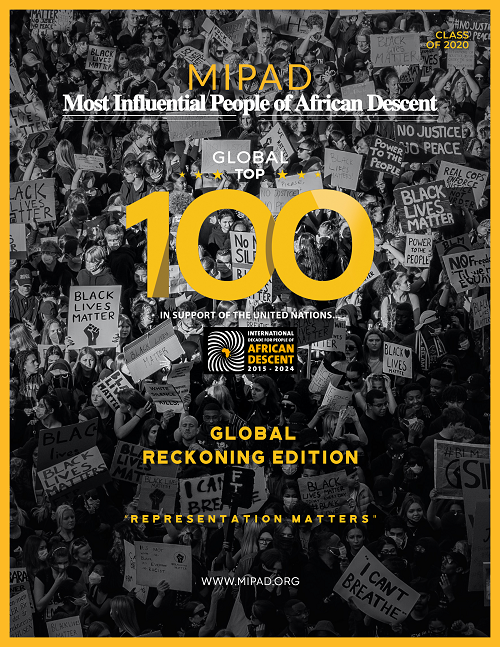 The Most Influential People of African Descent (MIPAD) Recognition and Awards Ceremony recorded massive success on Sunday, Oct 4th as outstanding personalities and high achievers of African descent around the world were recognized for their positive contributions to the world.

The ceremony was part of MIPAD’s annual Recognition Week following the opening of the 75th United Nation’s General Assembly. This year’s week was a virtual world-whirl tour of EXCELLENCE featuring insightful global discussions, leadership and personal development training before the official unveiling of the global list of 100 honorees in the Global Reckoning, 100 Under 40 & Climate Action Editions as a response to the paramount issues of our time; widening inequalities and climate change.

Speaking at the recognition ceremony, the UN High Commissioner for Human Rights Michelle Bachelet expressed that “the organization of this recognition directly falls under one of the three pillars of the International Decade for people of African Descent; Recognition, Justice and development. As we approach the mid-term of the international decade, we will need to do more to build up on our achievements so far, collating more awareness for social impact led by a global network of influencers such as yourself is much needed. The global anti-racism protests this year has made it clear that communities must be able to stand up against racism and racial discrimination, participate in shaping decisions that affects them and be able to air their views” she added.

“At the time we started this journey, we knew that having influence as a person of African descent is meaningless until it is connected to support the protection of human rights and dignity of our people. Fast forward to 2020, many of our honorees are on the fore front of leveraging their influence to support the current global racial and gender equality movement”, said Founder and CEO of MIPAD, Kamil Olufowobi.

“Naomi Osaka (Class of 2019), Michael B. Jordan, Colin Kaepernick (Class of 2018), Lewis Hamilton, Beyoncé (Class of 2017) to name a few are some of our past honorees exemplifying what it means to be a true MIPADian”, he noted.

One of the participants, Robinson Lynn, Executive Director, Momentum Education stated that “the MIPAD community is a support system that is phenomenal and my participation is one of the great honors of my life.”

Congratulations to the class of 2020 honorees for their positive contributions and service towards the advancement for people of African descent worldwide.